You may have come across recipes on the internet or in various brewing books that give grains as percentages instead of weights and wondered how to convert that into a recipe that you can use. Most modern brewing software like Beersmith, Brewer’s Friend, Brewfather, etc. allow you to do this with ease and speed. But, for those who want to understand the math behind the software, or just want to do it themselves–read on!

Before you can convert a recipe from percentages to weights, some information is needed. Most can be found in the recipe, while the rest may require a little extra effort. Speaking of a recipe, we’ll start off with a simple, one grain grist.

Looks pretty good so far, but how much malt do you actually need to make this beer? The following equation is the standard used to determine that, and other info.

There’s a lot of information going on there, but let’s break it down:

GW – grain weight
weight/volume – weight of 1L of water (as we’re using metric, this will be 1, as 1L=1kg)
SG – target specific gravity (or OG)
°P% – target degrees Plato, expressed as a percentage

There’s a couple different formulas to convert SG to Plato, but for the purposes of this equation, the simple version will work just fine – one can also use the table over at Brewer’s Friend (https://www.brewersfriend.com/plato-to-sg-conversion-chart/).

While we can get most of that from the provided recipe, it gives us no information about the %Extract or the %moisture, so where do those come from? As the recipe tells us to use Simpsons Maris Otter, we can head to their website (https://www.simpsonsmalt.co.uk/our-malts/finest-pale-ale-maris-otter/) and get that information which will look like this: 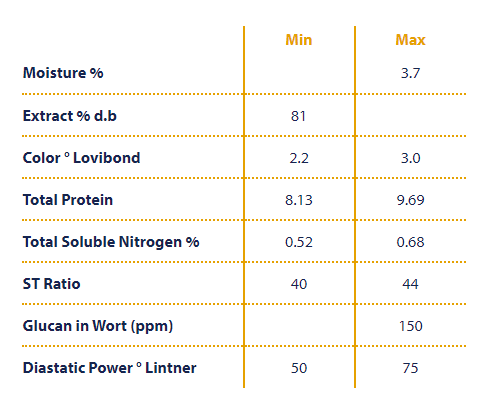 Some grain spec sheets may also give you %Extract, as-is which already takes into account the moisture (%Extract, as-is = %Extract cg,db * 1-%moisture).

So, now that we have all the necessary information, we can put it into our equation!

So, to make the recipe as stated, we’ll need 5.68 kg of Simpsons Maris Otter.

Building on this further, the example above was a simple one grain recipe but what if we had four grains?

For this, we just need to calculate the weight of each grain and multiply it by the percentage listed above.

It’s important to note that in the above example, the various malts used had similar specs, so the percentage ended up equaling the percentage of the total grain when the formula is actually calculating the percentage of total extract. This would become more apparent if using a roasted grain whose %Extract is significantly lower. For example, Simpsons Roasted Barley has a %Extract of 62% with 3% moisture, and if I were to use 5% in this recipe for some reason, I actually would end up needing 0.37kg.

Expressing a recipe as percentages allows for flexibility. For instance, if you know your brewhouse efficiency is only 65%, simply use that instead of the 72% in the recipe to determine how much grain you’ll need for your system. Or, if you don’t have that particular grain, you can substitute it for another and just use your grain’s %Extract and %moisture.

Next month, we’ll go over an alternative way to do these calculations using gravity units, or GU.